Made in the USA: A Visit to âThe Embroidery Capital of the Worldâ

Not only is it is home to the old Weehawken Dueling Grounds, where Aaron Burr and Alexander Hamilton famously duked it out, it has also spawned one World Heavyweight Champion (James J. Braddock), one Pulitzer-prize winning poet (W.S. Merwin), and one New Yorker cartoonist (Leo Cullum). As if that wasnât enough, it is the purported birthplace of the ice cream cone, invented in a special oven designed by a local man and popularized on the grounds of what was known as Little Coney Island, a North Bergen amusement park with a reputation for selling alcohol to minors.

Yet even in light of all these illustrious distinctions, perhaps the areaâs most significant contribution to American history is memorialized by a sign hanging over an overpass in Union City that reads: Welcome to Northern New Jersey: Embroidery Capital of the World Since 1872. 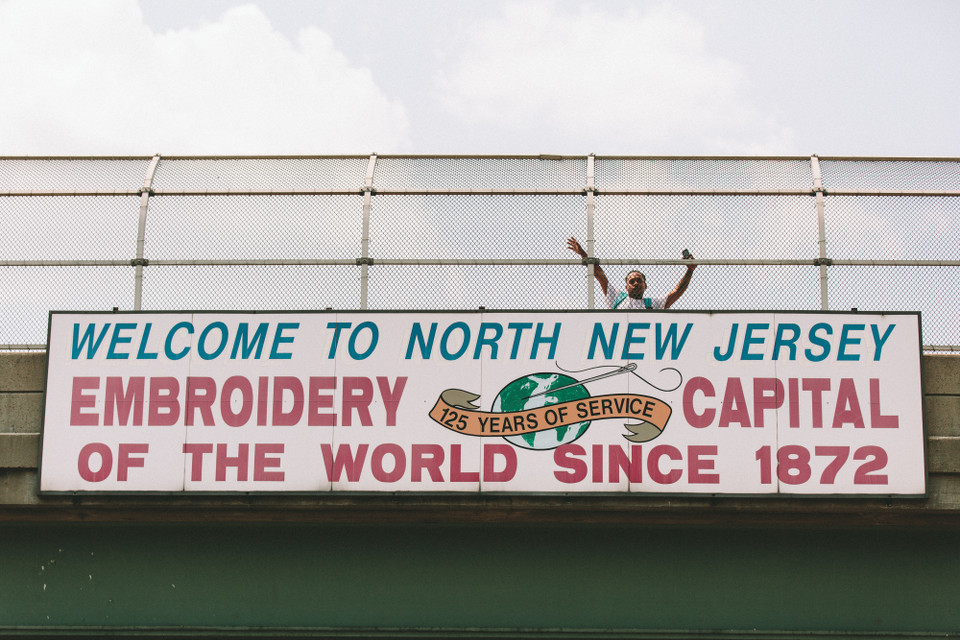 Just across the river from Manhattan, Hudson County was an ideal location for the fledgling embroidery industry for more reasons than one. While the first shops did everything by hand, it wasnât long before machines moved in. These were powerful pieces of equipment that vibrated with such force they needed an especially solid anchor to keep them from turning the land into a giant xylophone; early entrepreneurs would find this firm foundation in the bedrock of The Palisades, the steep cliffs that stretch along the west side of the river, from Jersey City to Nyack, NY.

Then there was the workforce; situated not far from Lady Liberty herself, the turn of the century saw a huge flood of German, Irish, and Italian immigrants, many of whom went to work in North Jerseyâs buzzing factories. Eventually, one wave gave way to another, and the influx of Cubans starting in the 1960s would give the area its other nickname: âHavana on the Hudson.â Central and South Americans would follow and today, quite a few North Hudson communities have a majority Hispanic population. 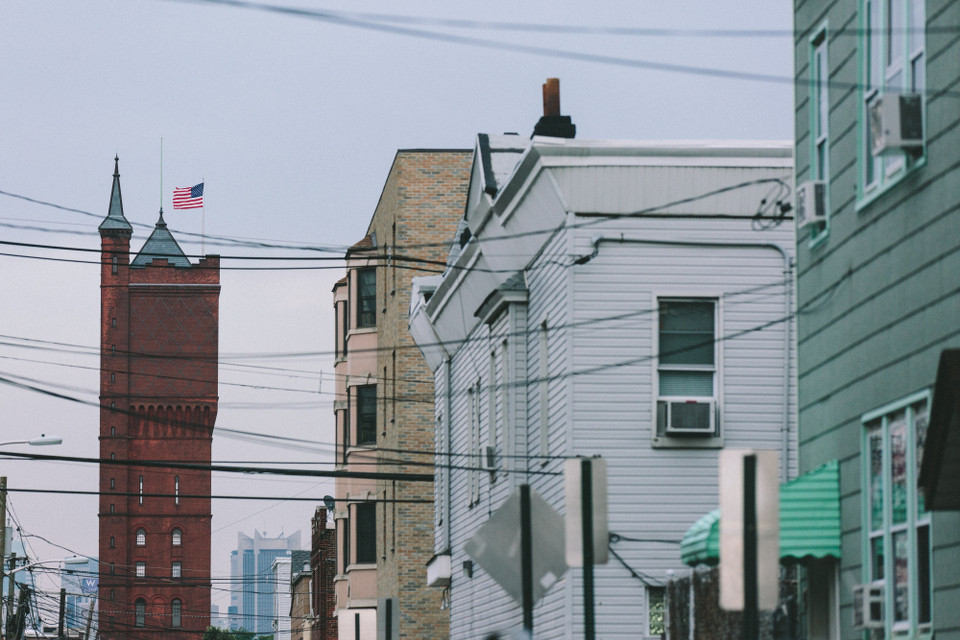 But the population isnât the only thing thatâs changed. Whereas in the mid-1940s more than half the New Jersey workforce was in factories, today that number hovers around 7%. The culprit, according to most factory owners, is foreign competition from places like China, where many American companies have moved their production, unavoidably causing a large number of North Jerseyâs factories and businesses to close their doors.

As a company that employs one of the remaining factories in the area, members of the Project Bly team, along with international photographer Shantanu Starick of The Pixel Trade, set out to explore the old embroidery capital one muggy day this past July. 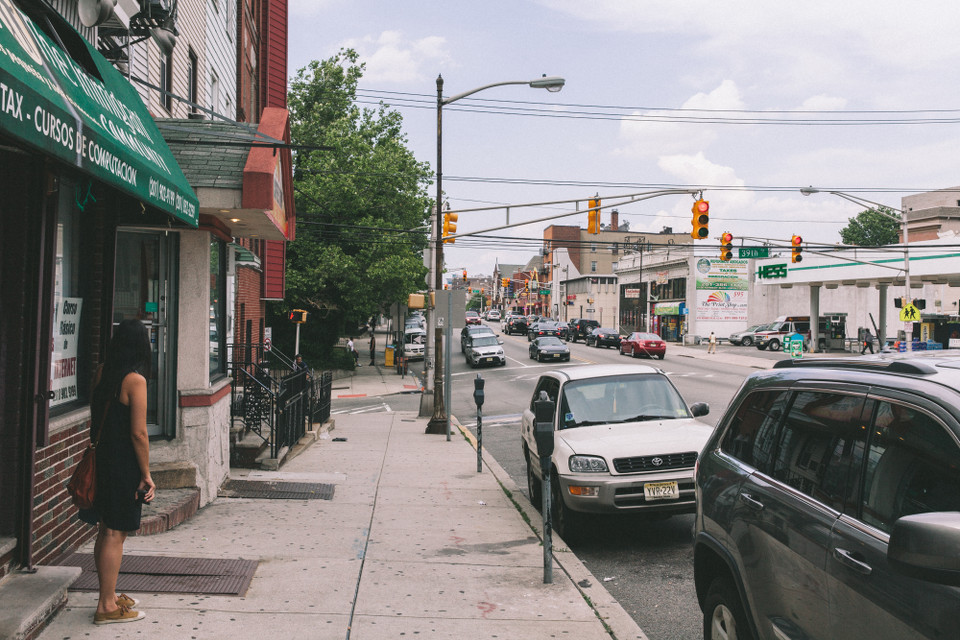 The old embroidery capital on a muggy July day

Though the factories of North Jersey are approximately three as-the-crow-flies miles from Manhattan, the area remains something of an island; the closest train station is Seacaucus Junction, which is still a fifteen-minute cab ride away from what was once the manufacturing hub. Once weâd finally found a cab (not an easy endeavor to begin with), we told the driver that we were doing a story on the factories of North Jersey, and he said that he would take us to the old silk mill near the border of Union City and North Bergen. Along the way, he explained that at the height of the embroidery industry the area had had over 40 garment and lace factories, one of which he had worked in as a boy; he wasnât sure how many were left, but estimated that it wasnât too many.

After our knowledgeable driver had dropped us off, we wandered down the main drag of Hudson County Boulevard, which a 1913 article in the New York Times described as âa fine runâ for scenic motoring. Now we passed a bank, a White Castle, and a gas station that provided cigarette vending machines between the pumps. The sidewalk was largely empty, with a few green, leafy trees growing up into a mess of telephone wires. 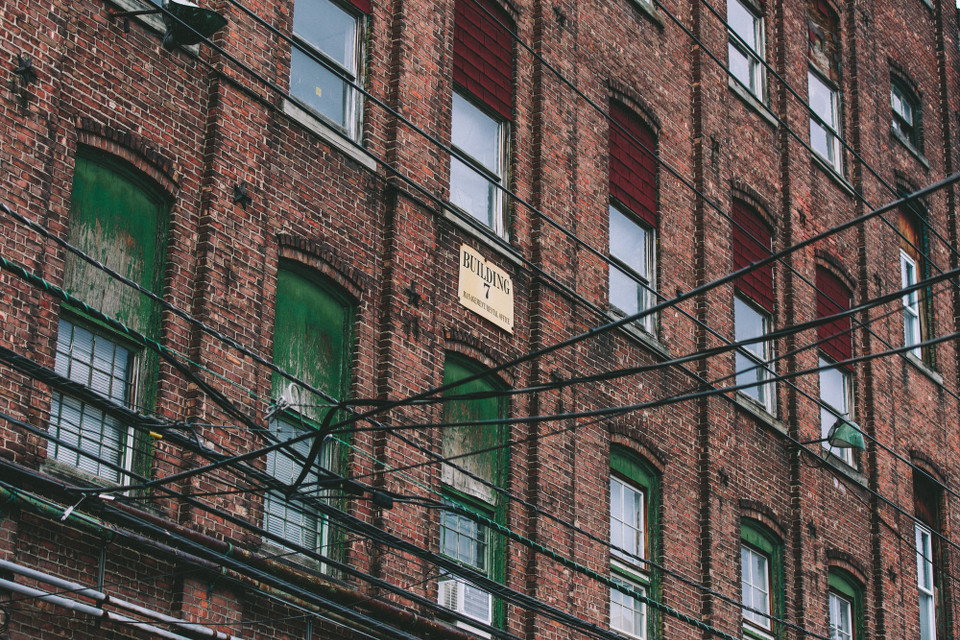 Eventually, we came to the abandoned Silk Factory, a sooty, red-brick monolith that took up most of a block. Ducking inside, we made our way through a maze of peeling paint and boarded up windows that seemed to go on forever. The only life around seemed to be the few pigeons who had made their nests in various rusty alcoves, but then we came to a low door, which led to a room where two women and one man were working at big sewing tables. Patterns were strewn between sewing machines and above them, a complicated system of plastic tarps made for a volumetrically interesting ceiling. 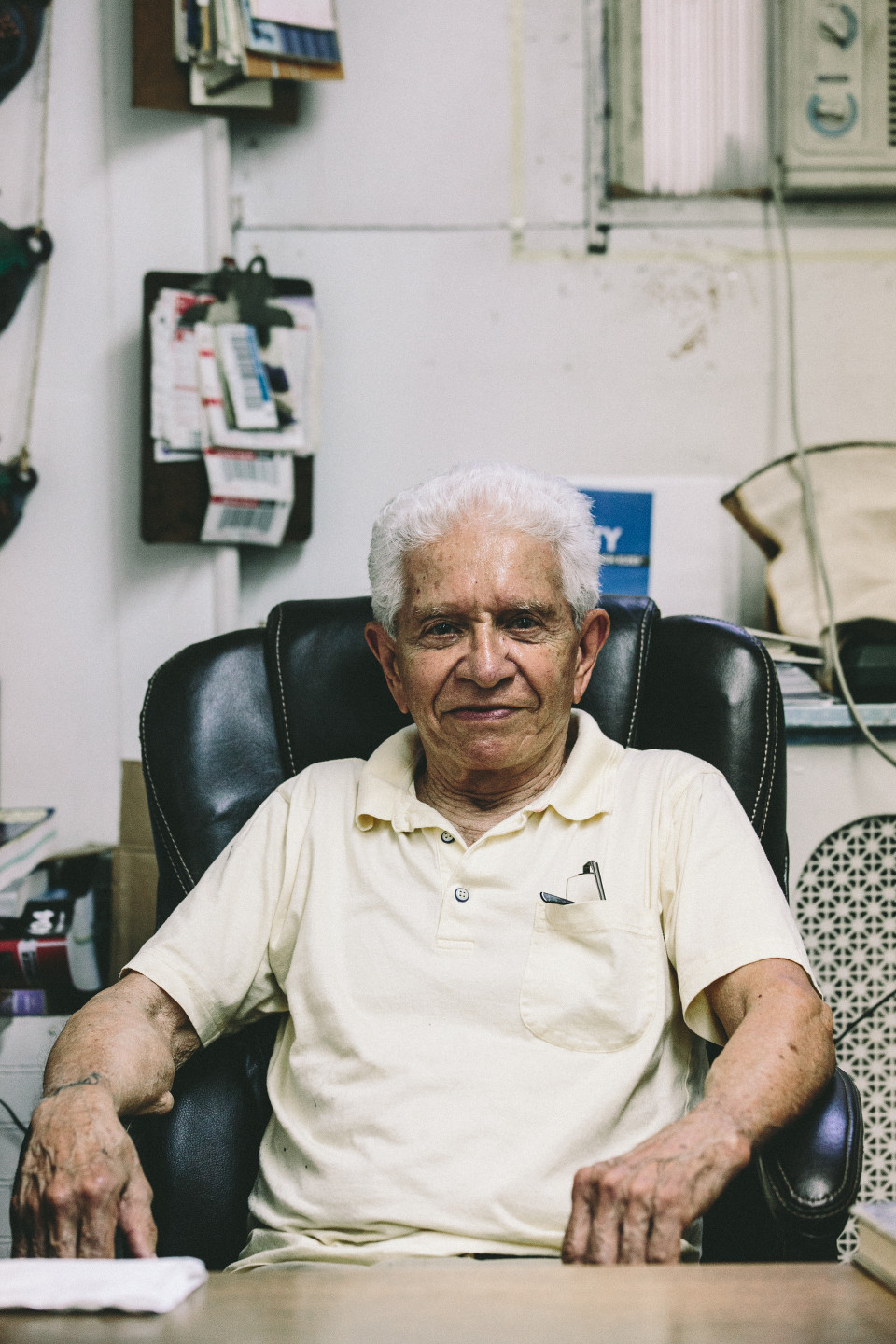 After exchanging greetings, the man offered to introduce us to the leader of this little outfit, and we followed him into a small office, where we met Mr. Ernest Vega, owner of Pleating Plus Ltd. Originally from the Bronx, Ernie has been working in factories since 1969. The first factory he worked at was in Manhattanâs garment district, but he moved to North Jersey in the 70s and has been there ever since. While posing for a portrait, he explained that Pleating Plus, as its name implies, made pleated cloth (think cheerleader skirts), and that the plastic tarps that hung from ceiling werenât avant-garde stylistic choices, but functional weatherproofing, flowing into big barrels so that when the rains came, the factory floor stayed dry.

When we offered to email Ernie his pictures, he laughed and said he didnât know anything about the Internet. How heâd managed to keep Pleating Plus afloat was a main topic of conversation at lunch, which we had at a Columbian restaurant called Canamelao, where the menu (in Spanish) included masas de cerdo frito (fried pork) and rabo de res en salsa (oxtail stew).

Of course Ernie is not the only factory owner who has persevered. Later, we met with Key Gaetano of ALP Sewing, who manufactures Blyâs pillows from the textiles that we source from around the world. The ALP (All Lace Processing) factory, also in North Bergen, is a clean, well-lit space with high (intact) ceilings and dozens of sewing machines, including a couple of old Heitzmans. Gaetano, who grew up working in his familyâs embroidery factory before starting his own 41 years ago, explained that his parents, collaborating with a man who made voting machines, had designed the Heitzmans themselves. Each machine was stamped with a number, and Key told us that he had just retired Machine #3. He also told us that he knew how to work every single machine in the factoryâa claim that we did not for a moment doubt. 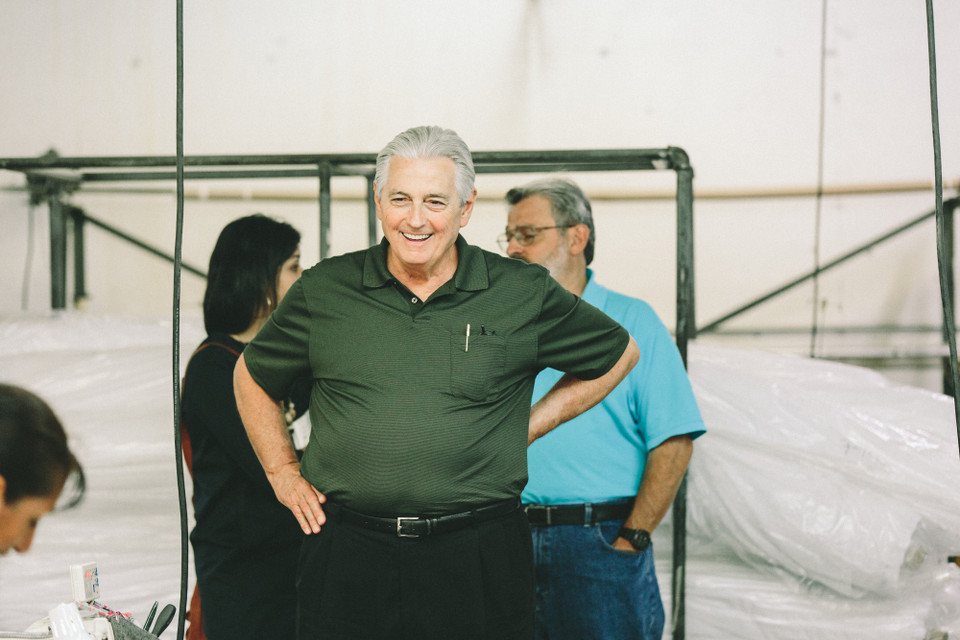 Key, who runs ALP along with his brother, Frank, told us that while business had been pretty good through the early 90s, around 1998, production really started moving offshore and prospects declined rapidly from there. Trying to keep afloat, Gaetano turned what was once only a lace processing house into the whole dealâa âcut & sew,â as he calls itâand started working with smaller companies, including several brands of high-end underwear. On top of lacy panties, ALP makes table runners, napkins, pillowcases, and, after the nationâs recent spate of school shooting, shades that can Velcro on to a classroomâs windows.

Adaptation has been crucial to ALPâs continuing success, and these days Gaetano says the future is looking a lot brighter; as labor costs rise in China, it no longer seems worth it to produce goods halfway around the world, where the slow turnover has always been a drag anyways. Key himself recently started working with a company that at one point had moved 95% of its business overseas, but is now reconsidering.

In other words, people are coming home and itâs looking like the embroidery capital of the world is back in business. 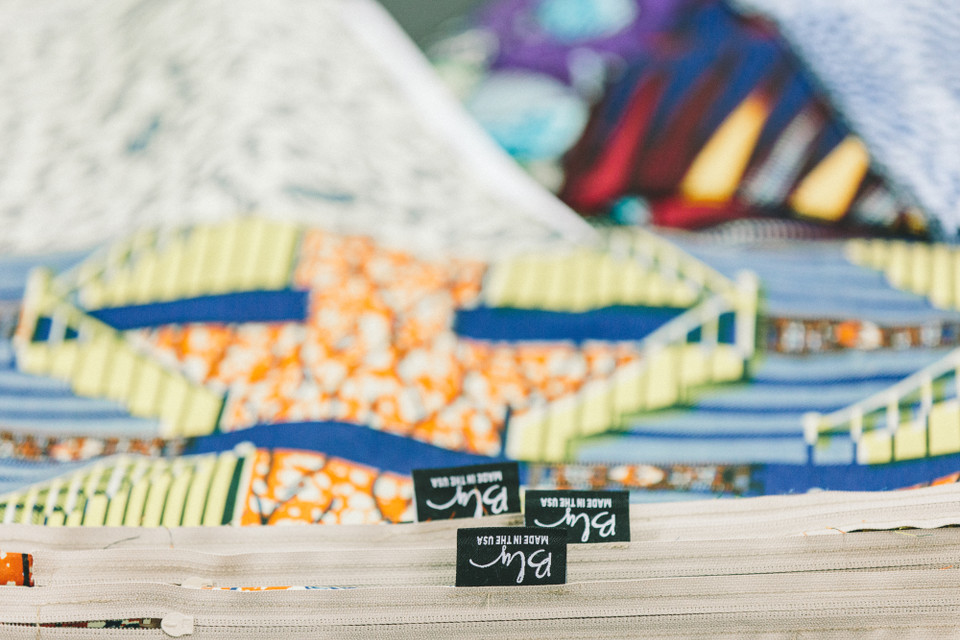 To check out Blyâs pillows, made at ALP Sewing from textiles sourced around the world, click here

And to learn more about photographer Shantanu Starick and The Pixel Trade, click here