Who's the King? : Muhammad Ali In Ghana

In the summer of 1964, Muhammad Ali took a trip to Ghana, a visit the boxer called "a return to the fatherland." In the VIP room of the Accra Airport, he was greeted by Ghanaâs Foreign Minister Kojo Botsie, who welcomed him on behalf of President Nkrumah and gave the Champâwho already had quite a few namesâyet another one: Kwame Muhammad Ali. "Kwame," the name for an Ashanti boy born on a Sunday, was a reference to the day of Aliâs arrival.

From the airport, Ali was driven to the city at the head of a motorcade past a crowd of enthusiastic thousands. News reports at the time called his visit the biggest deal since the movie star Gene Kelly had come to Ghana on a State Department tour the previous January. This may have been an understatement; having trouble making his way through the throngs of people back to his limousine after a quick courtesy call on the US ambassador, Ali shouted, "Whoâs the King?" "You are!" the people responded. "Okay," Ali said, "let me through then," and the crowd parted immediately (somehow itâs a little tough to imagine Gene Kelly doing the same).

Over the course of the next few days, Ali met President Kwame Nkrumah, whom he deemed "a great guy," put on an exhibition match with his brother, and kissed more babies than a candidate on the campaign trail. He sampled local food (preferring coconut to groundnut soup), did the twist at a band concert in Accra, and in Kumasi, tried to remove the legendary Okomfo Anokye sword, said to have been planted in the ground by the Ashanti High Priest himself, who claimed that the nation heâd founded would persist as long as the sword stayed in place. If thatâs true, Anokyeâs nation seems pretty secure; after five minutes of struggle, the sword still wouldnât budge and the Champ gave up. Throughout it all, Ali wore Ghanaian kente cloth, in particular a beautiful Oyokoman, the design traditionally worn by Ashanti kings.

Of course, even with his jam-packed itinerary, the notorious ladiesâ man still found time to chat up the local women. According to Charles P. Howard Sr., a journalist who tagged along with the Ali party on their Ghanaian adventure:

Whenever he spots a group of African girls, he speedily breaks away from his party, joins them, and with his huge, long arms, gathers them in and directs his private photographer to "take this and make sure I get it."

The lensman was Howard Bingham, who photographed Ali for three decades. His photos of the champ in Ghana are published in Muhammad Ali: A Thirty Year Journey, as well as Wrapped in Pride: Ghanaian Kente and African American Identity, pictured below. 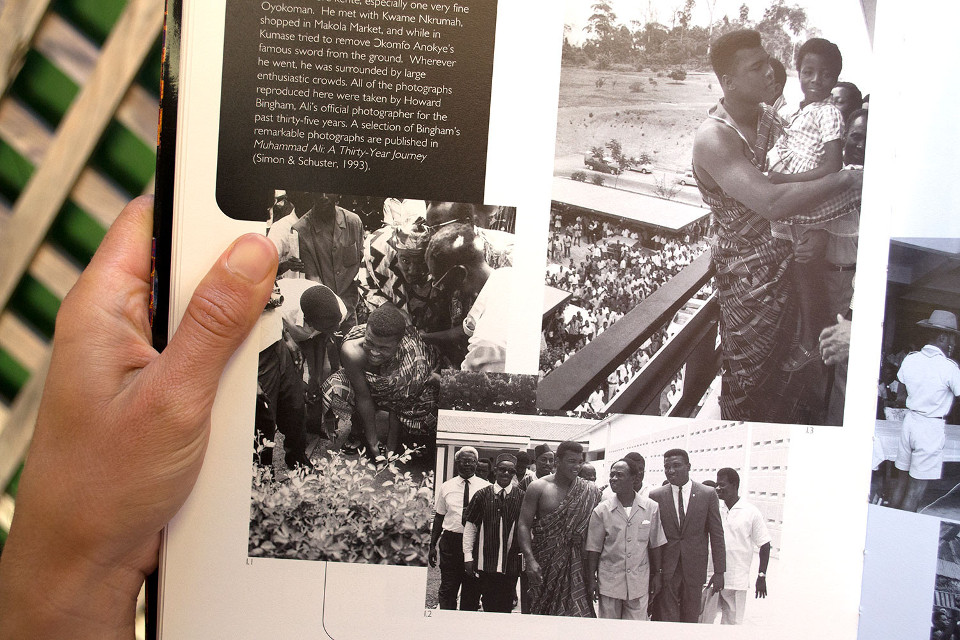