At Project Bly we have a slight street art obsession. Whether it is the politically charged murals of La Paz or the soccer-inspired walls of Marrakech, street art is often our first introduction to a cityâs passions and grievances.

Inspired by the launch of Googleâs Street Art Project earlier this week, we thought it was time to share our, very subjective, list of the top 10 street artists working around the world today.

Self-described as a âphotograffeurâ, French artist JR believes that the street is "the largest art gallery in the world." He takes unguarded photographs of everyday people and then wheat-pastes their giant black and white portraits everywhere from the favelas of Brazil to the Pantheon in Paris. He forces us to confront each other, to turn our personal identity into a form of public expression.

Another street artist who believes in turning ordinary people into icons, Portuguese-born Alexandre Farto creates murals of people he meets in each city. Using power drills and chisels, along with different types of paint, he literally scratches off the buildingâs surface to create his masterpieces. 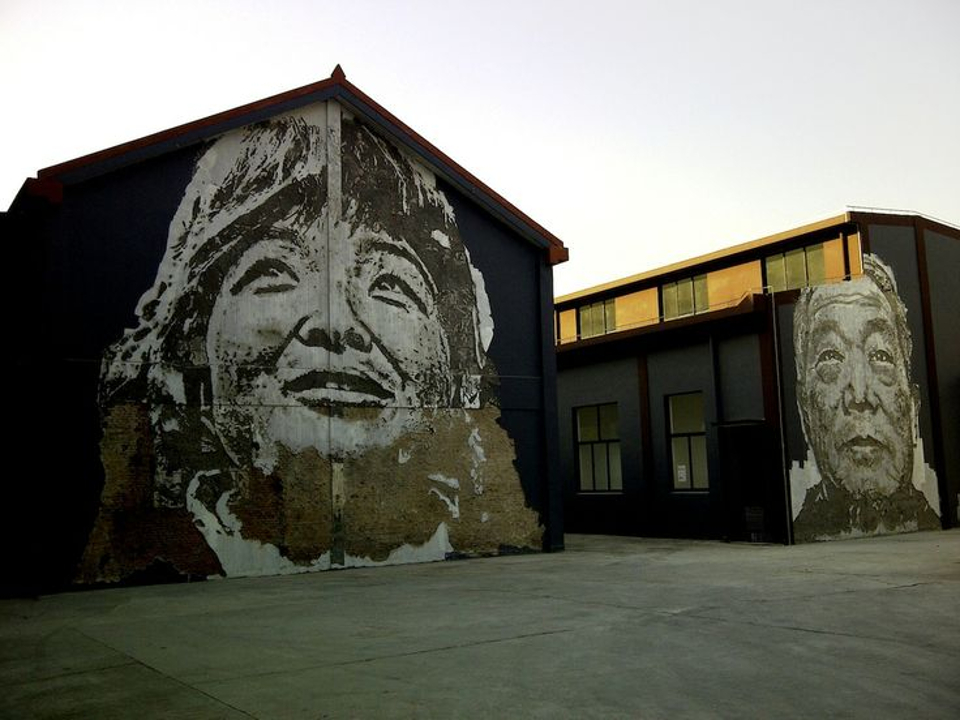 As one of the worldâs most promising and prolific street artists, Gaia took a seemingly unexpected path to success. Born on the Upper East Side of New York, he studied at the Maryland Institute College of Art before deciding to focus on Baltimoreâs derelict buildings, giving them a renewed political purpose. Beyond Baltimore, Gaiaâs country-specific art has appeared everywhere from Buenos Aires to Seoul, London and Amsterdam. With a name deriving from the Greek Earth Goddess, Gaia confronts issues of environmental degradation, gentrification, immigration, segregation and urban development. 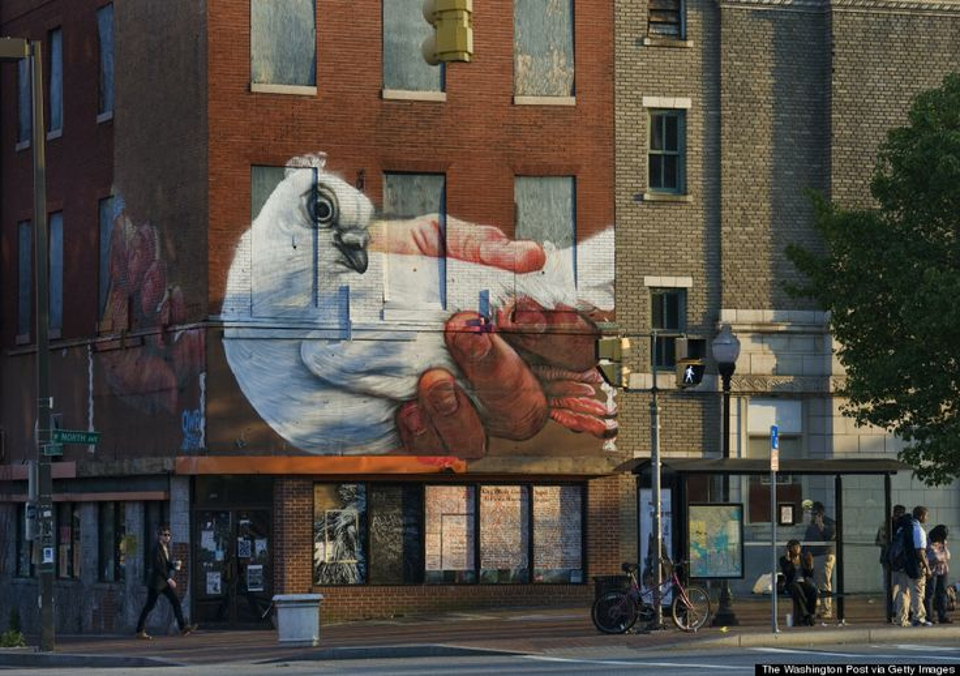 One of the worldâs few female street artists, we first came across Swoonâs work on the streets of Oaxaca. Famous for life-sized wheat-paste portraits of her friends and family, Swoonâs work is inspired by everything from German Expressionist wood block prints to Indonesian shadow puppets. 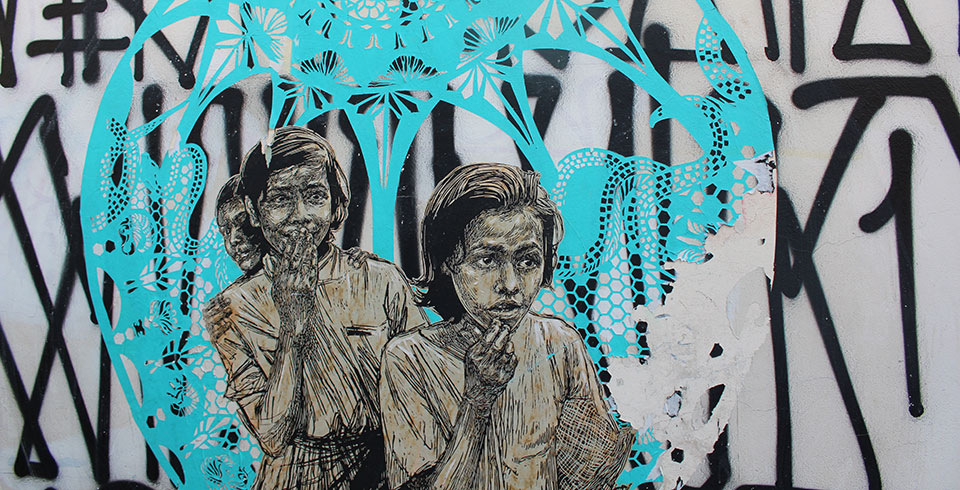 Brazilian muralist Eduardo Kobra is known for creating photorealistic and kaleidoscopic murals representing eras past. By researching each cityâs unique history, he aims to recreate a version of the city that no longer exists, to give viewers âthat moment of memory or nostalgiaâ. 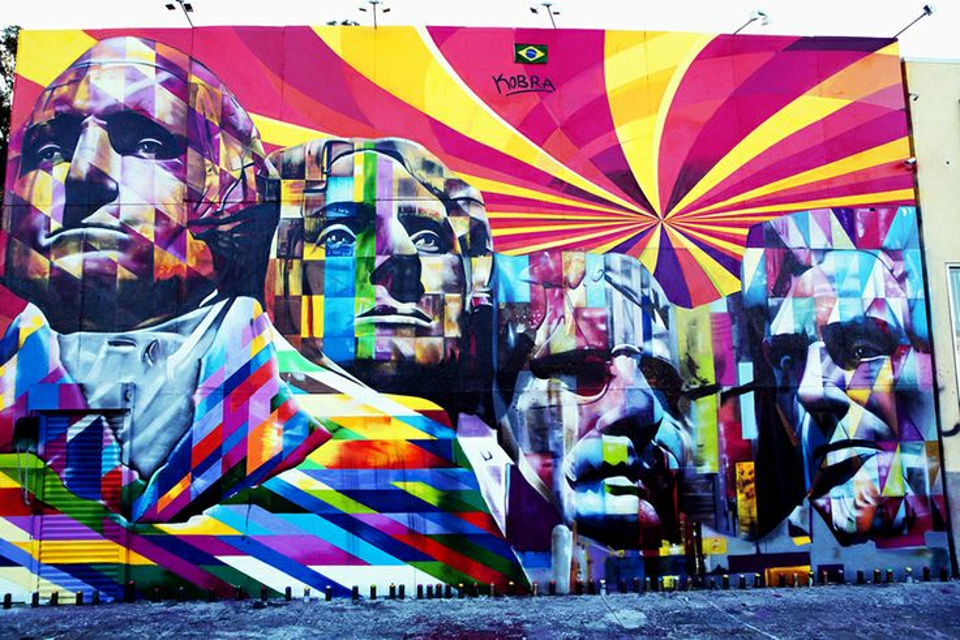 Under the moniker FAILE, street artists Patrick McNeil and Patrick Miller, have been adding colorful urban interventions to their Brooklyn neighborhood for over a decade. Taking their inspiration from the detritus of the cityâs walls, the decay of advertising and pop culture, their work represents the urban experience and the lines between âhighâ and âlowâ culture. 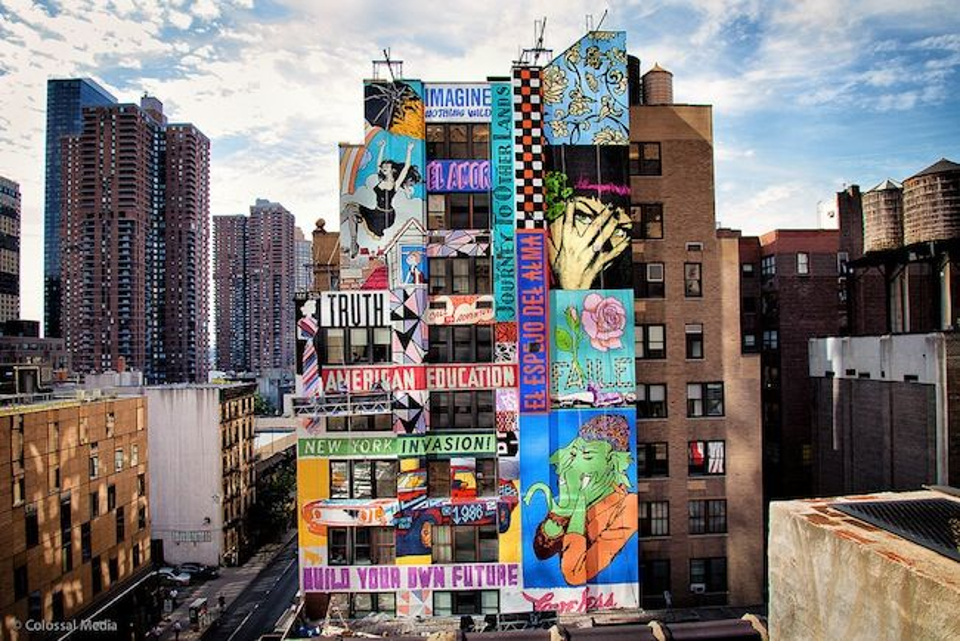 (Image via The Design Ark)

Born in Senigallia, Blu now lives in Bologna, Italy and has been active in the street art scene since 1999. Using a limited palette, and focusing on line and form, Blu (who closely conceals his real identity) creates epic renderings of his sketchbook drawings. His work depicts everything from his distaste for war and injustice, to his take on global warming and consumerism. We spotted this Blu mural in Krakowâs PodgÃ³rze neighborhood (we will be featuring more Polish street art when our Krakow collection launches in the fall). 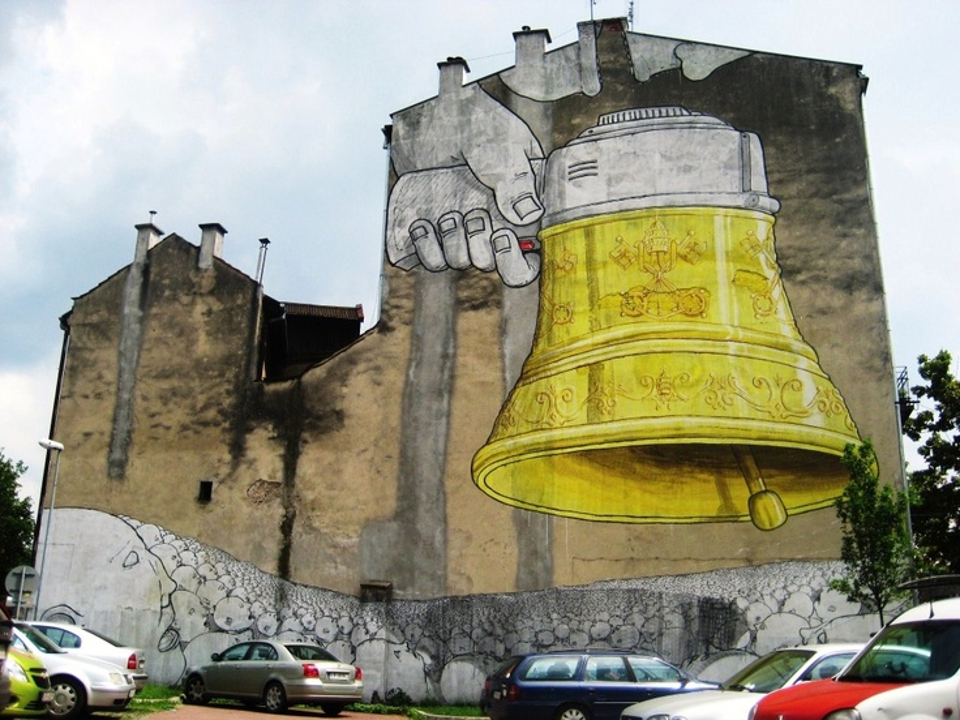 Growing up as one of the prominent street artists in Buenos Aires, Jazâs work is strongly influenced by Mexican Lucha Libres and Argentinaâs figurative artwork. Experimenting with materials like tar, dirt and gasoline, Jaz gives his murals an unexpected watercolor effect. 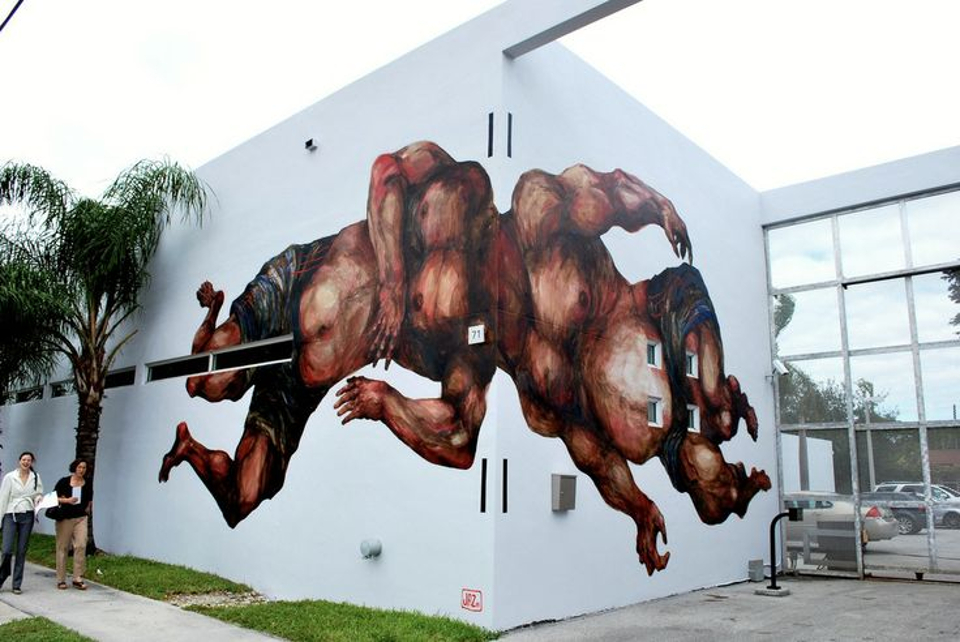 Originally from Ghent, Belgium, ROA uses his art to bring peopleâs attention to the effect of hunting and pollution on the natural world. By alternating between the playful and the putrefying, the endoskeleton and the exoskeleton, ROA depicts locally endangered species in a stark, often monochromatic, palate.

(Image via This Is Colossal)

Puerto Rican-born street artist Alexis Diaz has built an international reputation with giant murals covering everything from a crumbling building in Bratislava to a makeshift billboard in the Arizona desert. Often collaborating with fellow street artist Juan Fernandez (collectively calling themselves La Pandilla, or The Gang), their work focuses on the idea of transfiguration. Using tiny brushstrokes they depict animals morphing into one another, hands and skulls becoming wings and creatures transforming into ships. 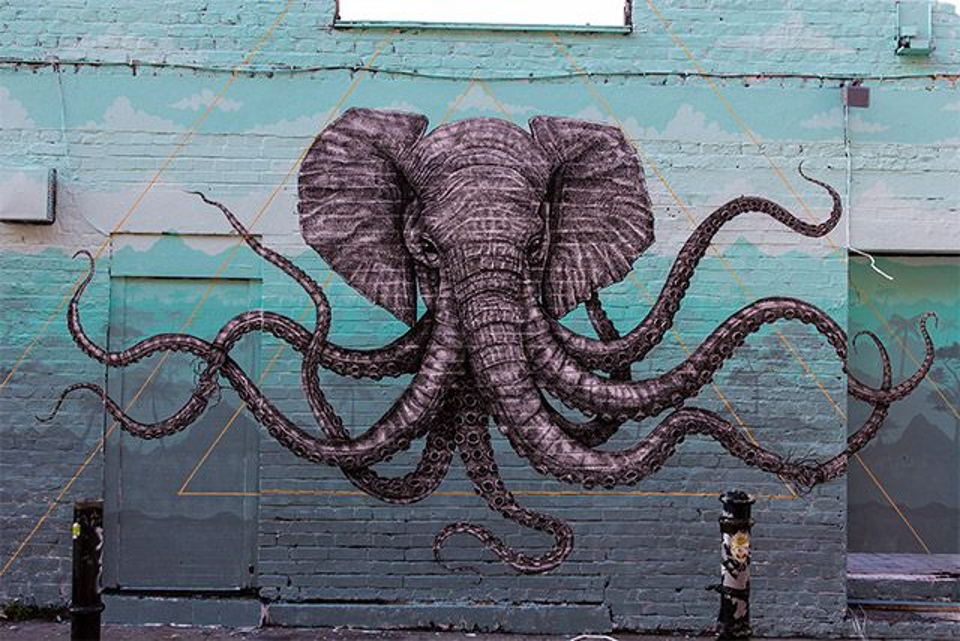 (Image via This Is Colossal)