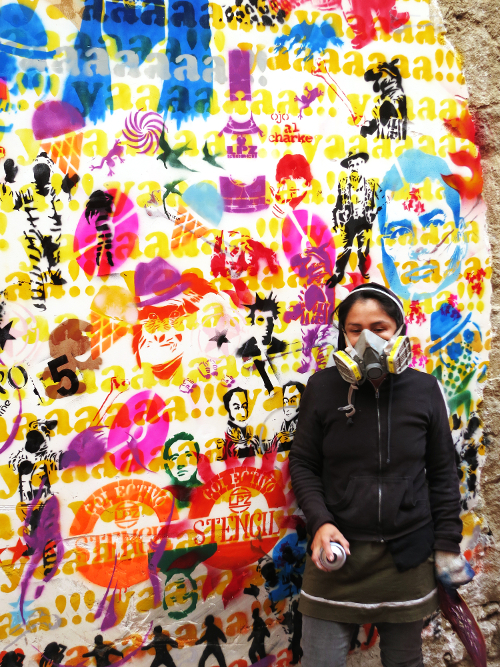 The stencil has taken over the city of La Paz, turning walls and sometimes even the sidewalks into concrete canvases where citizens have their say aboutâwell, really anything they care to address. The result? Bold, striking artwork that is often snarky, funny, and ironic, but also beautiful, uplifting, and inspiring. These graphic manifestos, which you can find everywhere from Murillo Square to the residential streets of Sopacachi and tony enclave of Calacoto, are the work of La Paz Stencil, a group of diverse artists that âunite around the technique of the stencil to realize urban interventions.â

According to La Paz Stencil, the stencil, their instrument-of-choice creates âa thoughtful, artistic alternative to the bombardment of commercial and political messages that inundate the city.â Central to the groupâs stated mission is the creation of new icons, and they encourage people to download and print stencils on their website, thus ensuring their proliferation.

One of our favorites was a joke on businessman and politician Doria Medina, whoâs the leader of the conservative National Unity Front and also the chairman of the Bolivian Burger King Franchise. The stencil features the impresario wearing a Burger King crown above the companyâs logo, which has been tweaked ever so slightly to read âBurguÃ©s (Bourgeois) King.â

At the same time as they critique public figures, La Paz Stencil is also dedicated to âmaking visible the people who arenât visible.â The city, after all, is a place that continually threatens its residentsâespecially the poor and disenfranchised, with anonymityâa kind of social and political invisibility that the enterprising stencilists work against by bringing individual expression center stageâsplashed across a ten foot high wall where it canât be ignored.

At the end of the day, La Paz Stencilâs project is really an exploration of identityâof what it means to be âurban and paceÃ±o,â or a native of La Paz. For more La Paz art click here.