On the Hunt for Indigo: the Bluest of Blues

This is the story of a color, indigo; a complicated color that elicits complicated feelings. This bluest of blue evokes not just desire and passion, but jealousy and envy, the perfect impetus for globalization.

But lets start this story at the beginning. Over 5000 years ago, Indigofera tinctoria , a shrub of a plant with pretty purple flowers, was cultivated in the fields along the banks of the Indus River. The ancient civilizations of Harappa and Mohenjo-Daro that once thrived in what is currently Northern India and Pakistan, fermented the leaves of indigofera to create a blue cake-like powder, a natural dye for cotton which was also grown in abundance in these rich soils.

The people of the Indus civilization were more than just farmers, however, they were also merchants, and traded their cotton and indigo for gold and jade from Mesopotamia, Persia and Crete. The Romans and Greeks likely discovered this brilliant blue in the bazaars of cities like Assur and Babylon as early as the 2nd and 3rd Centuries. The Greeks dubbed the blue cakes of indigo âindikonâ, meaning from India, which eventually became âindigoâ in English. For another thousand years or so, indigo only found its way to Europe via overland trade routes and was so rare and coveted that it was often called blue gold. It would be a long time before indigo was as common as a pair of blue jeans.

In fact, it wasnât until after a young Portuguese explorer, Vasco de Gama, set sail from Lisbon in 1497 with directions from King John II of Portugal to find out what lay beyond the Cape of Good Hope, that Europeans would begin to get their hands on this blue dye. By the 1700s, with an established maritime trade route to India, young wealthy men from Paris to London only had to go to their local tailor to purchase indigo dyed blue dress coats, which the very fashionable, according to Goethe, paired with striped yellow pants. In the 1700s the British went straight to the source: India. And, on our hunt for this blue hue, so did we. 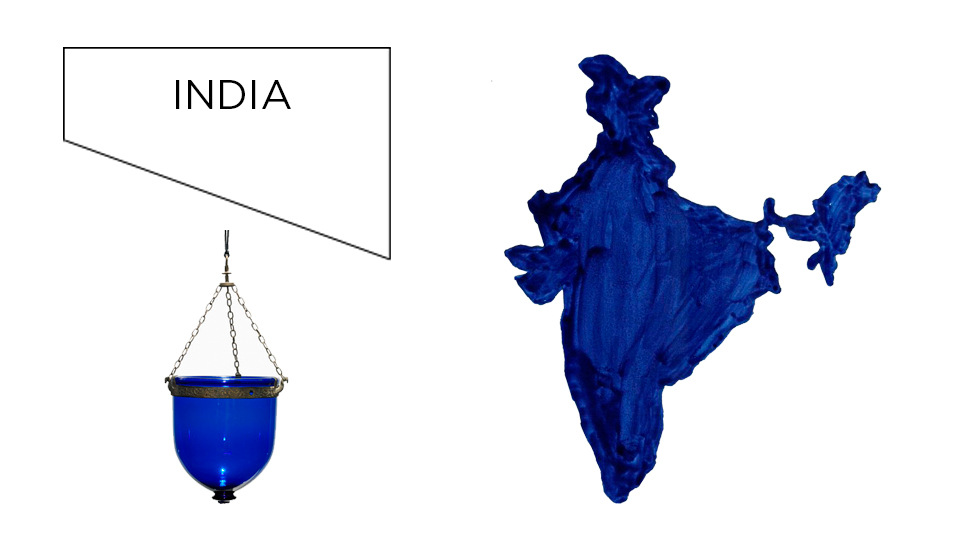 Our first port of call was, of course Mumbai, India where we found this antique indigo hundi lamp, hand-blown at about the same time that the indigo fashion craze was sweeping through Europe. Handmade in Austria, Belgium and England from 1750 to 1900 for the British East India Company and its Dutch counterpart, hundi lamps soon became the principal form of lighting in the colonies, designed to burn whale oil or candles.

From India, indigo traveled west along maritime trade routes to West Africa and east overland to Vietnam and China, finding it way into Central Asia via the Silk Road. 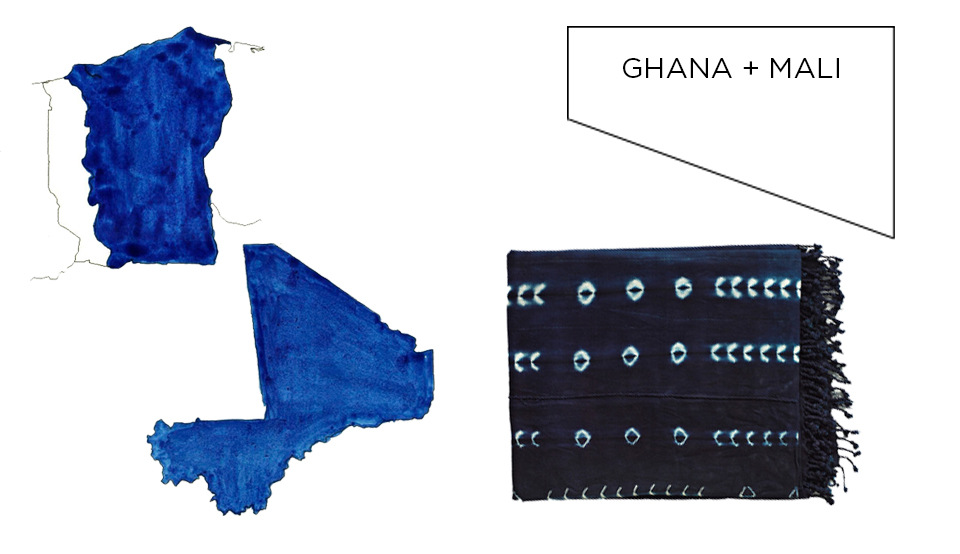 We purchased these tie-dyed Tuareg indigo textiles in Kumasi, Ghana from Mr. Maciere Toure, a tall and distinguished gentleman from Nioro du Sahel in Mali who had traveled to Kejetia market with textiles and jewelry to sell in order to earn money for his family. Indigo, a plant that thrives only in tropical and subtropical climates and soils, also eventually took hold in West Africa, often growing wild along the coasts. Tribes from the Tuareg to the Fulani used this indigo to dye their robes a deep blue. Mr. Sahelâs ancestors would have likely, much like him, brought textiles and indigo to the West African Gold Coast to sell to Portuguese, British and Dutch traders who docked their ships here on their way to India via the Cape of Good Hope. 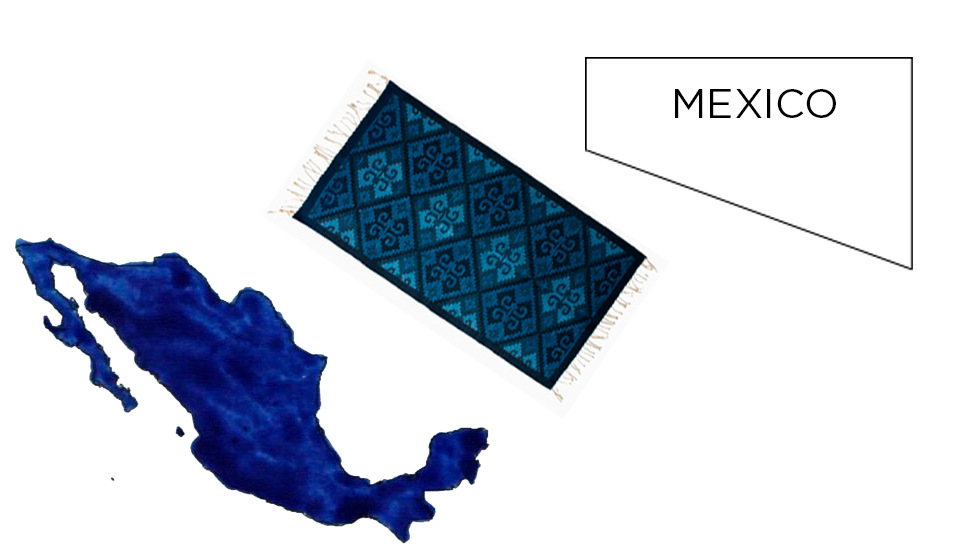 Continuing on along the western coast of Africa, trading ships carrying indigo eventually arrived in Portugal, Spain, and England. As the demand for indigo increased across the world, the Spaniards and Brits introduced Indian indigo to their colonies in the Americas. Words can often tell you a lot about history, and the Spanish word for indigo is aÃ±il, which is very similar to the Sanskrit word for blue ânilâ. In Mexico the weavers of Teotitlan de Valle still use the natural indigo brought by the Spanish conquistadors to dye the wool for their beautiful rugs. 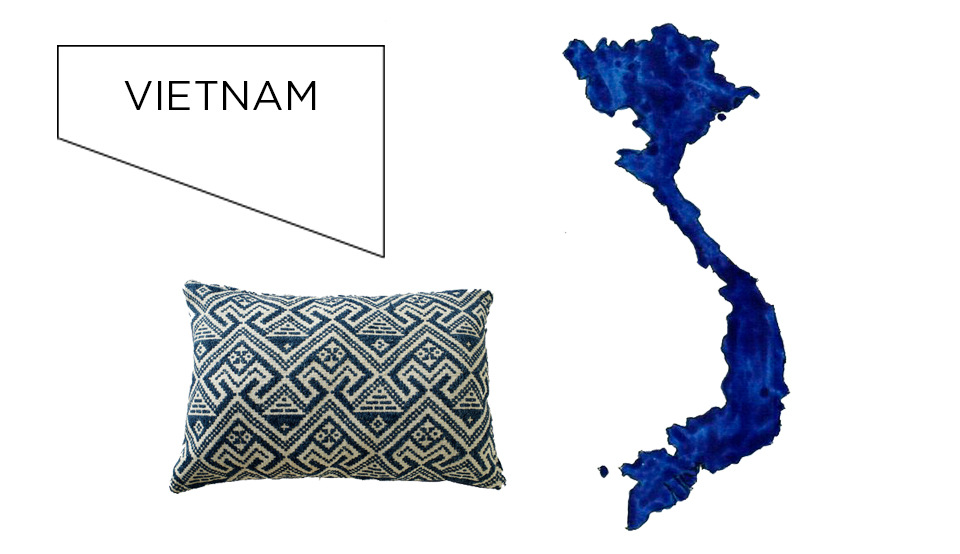 Heading east, in Hanoi, Vietnam we found a continued abundance of blue. Likely brought overland hundreds of years ago to Vietnam, the indigo plant still thrives in the countryâs fertile northern and central valleys. The Dao, the Tai and the Hmong tribes all live in these lush valleys and grow the plant alongside rice in their terraced fields. The leaves are harvested to make indigo vegetable dye using the same process that their ancestors used. Hand spun yarn and textiles made from cotton or hemp are then dyed a deep dark shade of indigo. These pillows are made from a vintage Tai textile we purchased in Hanoi. 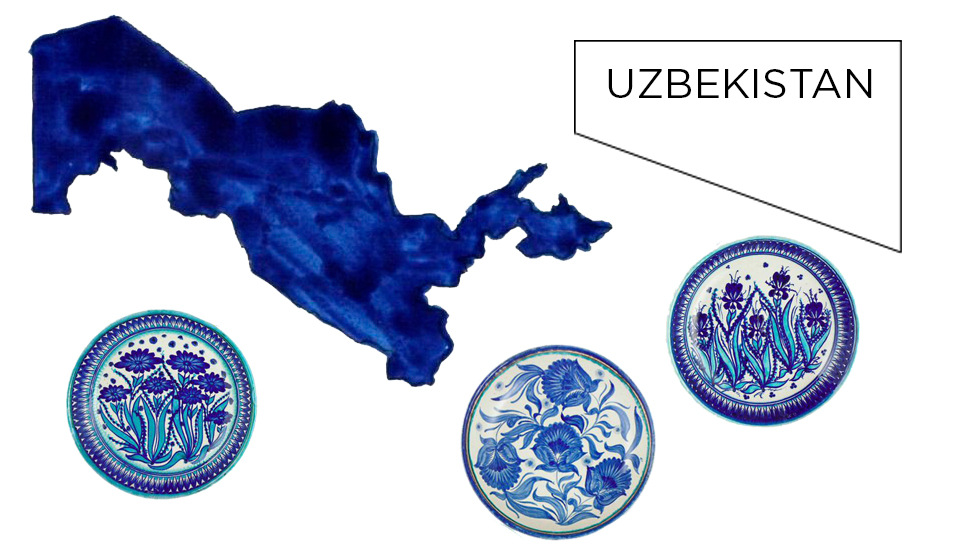 Indigo reached Uzbekistan via two different routes. One was likely from South East Asia to China and then along the Silk Road to Uzbekistan. The other was via trade routes from India to Persia, before it traveled on to Egypt. A discovery of secular papers from Jewish merchants in a chamber near a synagogue in Cairo suggests that the indigo trade from India to Europe and Central Asia via North Africa thrived between the 10th to the 13th Centuries. Indigo was traded for twice as much as pepper and cardamom, but eventually the trade slowed down when indigo was introduced as a crop and cultivated in the Arab world, including in Uzbekistanâs lush Fergana Valley, where we found these plates.

Weâve found a lot of indigo in our travels and weâre fascinated with this blue hue, not just for its beauty but for the story it tells of globalization and trade dating back thousands of years. Weâll be continuing our hunt for indigo this fall in Japan, a country that has been familiar with this beautiful blue dye since the 10th Century.